There are many types of complications that come with diabetes, some are painful and some are life-threatening. However, Glaucoma is one that can be cured or at least it can be helped. Diabetes affects more then 16 million people in America. Some form of eye disease affects almost every diabetic patient, there are different types of eye diseases but the most common is Glaucoma. Glaucoma is caused by the damage that is severed to retina and the optic nerve in the eye. Those who have diabetes are already at risk, however the older you are the more you become at risk for Glaucoma. Those with diabetes are twice as likely to be diagnosed with Glaucoma then those who do not have diabetes. 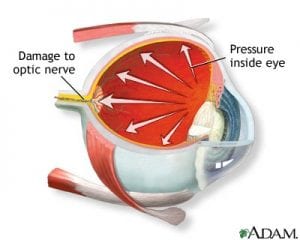 Glaucoma And Diabetes: There are many types of complications that come with diabetes, some are painful and some are life-threatening. However, Glaucoma is one that can be cured or at least it can be helped. Diabetes affects more then 16 million people in America. Some form of eye disease affects almost every diabetic patient, there are different types of eye diseases but the most common is Glaucoma. Glaucoma is caused by the damage that is severed to retina and the optic nerve in the eye. Those who have diabetes are already at risk, however the older you are the more you become at risk for Glaucoma. Those with diabetes are twice as likely to be diagnosed with Glaucoma then those who do not have diabetes.

Other diabetic eye diseases are called Cataracts and Retinopathy these are less common but are still diagnosed with diabetic patients. When being diagnosed with Glaucoma you will hear of the 3 different types of Glaucoma types. Open-angle Glaucoma is the most common of all 3 types of glaucoma known about. Open-angle Glaucoma happens very slowly and some patients do not even realize that they have it damage happens so slowly that it may not be noticed for many years.

The second type of Glaucoma is called Closed-angle and it only affects just one eye and can present an increase in pressure throughout the eye. Closed-angle can cause a huge amount of pain, nausea, some visual effects have been noticed and some people have complained about seeing halo’s around certain lights.

The last type of Glaucoma is called Neovascular Glaucoma and is considered the rarest type of Glaucoma types because it does not always come with sudden vision loss. Neovascular occurs when blood vessels are starting to grow on the iris itself, which is the colored part of the eyes. Once this happens fluid starts to be cut off, which then raises a huge amount of pressure in the eyes. This has become one of the hardest diseases to treat; however, laser surgery has become quite popular. Laser surgery reduces the abnormal growing vessels found on the iris. Some people however have opted for drainage implants.

Drainage implants are also referred to as Valve implants, some other treatments are given by certain medical prescriptions. However, Valve treatments have taken on several different names; some refer to them as “aqueous shunts” while others refer to them as “Glaucoma drainage devices.” These implants work by allow fluid to drain from the eye or eyes so that way there will be no pressure build up. A device is placed near the eyes so that way the tube which is placed for drainage will not close up or shut down while trying to relieve pressure from the eye. Implant of today’s technology present a tubal form that helps the aqueous fluids.

To more understand what aqueous means, we have to look further into the eye. There are two segments to the eye itself which are filled with fluids called aqueous and vitreous humors. The aqueous is always being refreshed and the old fluid is constantly being washed away. When you are diagnosed with Glaucoma then you might start to notice some built-up pressure forming in your eye. This is cause by the aqueous fluid not being able to drain properly which will in turn cause some vision problems and some pain from your eye. A procedure defined as Tonometry can help doctors and Ophthalmologists measure this pressure which is referred to as intraocular pressure.

The valve implants we first developed in 1966 starting with Molteno. Two basic types were designed valved and non-valved; the valved designs are called Ahmed and Krupin while the non-value designs are called Molteno and Baerveldt. Thousands of implants have been used yearly to help patients to feel less pain. Some surgeries have been done to help those suffering from Neovascular glaucoma and nothing has been so successful more than the valve implants have.

Some herbal treatments are available for Glaucoma is available on the internet; one fore instance is called Dr. Christopher’s Bilberry Eye Formula. This is a blend of herbal ingredients that helps with the circulation to the eye and with the overall treatment of Glaucoma. It also helps to repair some of the damaged vessels caused by Glaucoma, help with loss of vision during the night and can cleanse tissues in the eyes while bring antioxidants to eyes. Bilberries, the main ingredient in this formula are a family member of blueberries. Another ingredient that comes in this formula is called anthocyanosides; this is the main ingredient that will help those who have lost eye-sight through-out the night be able to see again. Other ingredients consist of Bilberry leaves, eye-bright herb, cayenne pepper and ginkgo leaf. You can purchase a 100-count bottle for $18, but in looking through-out the web you can also find lower prices.

Another herbal treatment is on that has been heard of for a long time now; it has been controversial against for many years. Marijuana has been shown in many experimental researches to help to symptoms of Glaucoma. From a test in 1970, Marijuana proved a huge percentage of people who found relief of pressure from intraocular pressure in the diabetic patients who had glaucoma. Granted, this herbal drug can not be purchased, it can only be prescribed in medicinal amounts.

Oregano has been scientifically proven to help prevent glaucoma from happening especially if glaucoma is hereditary in your family. It is recommended by Naturopaths to find foods that contain Antioxidants that resist glaucoma. Wild oregano is one of these foods; it actually contains far more antioxidants than most foods.

One more herbal treatment that you might want to try is called Jaborandi; it comes from a tropical tree that grows in South America called jaborandi. Before the Spanish explorers arrived in South America, jaborandi was being used medicinally. Back in time around the mid- 1600’s some Spanish naturalists found the effects of jaborandi to have a tremendous affect on curing eye disease. It was actually an ingredient found in 1875 called pilopcarpine. Pilocarpine is usually formed into eye drops to help people with Glaucoma, using just one drop can take effect in 15 minutes and then will keep the eye protected for 24 hours.

Try some fruits and vegetables that contain vitamin C have also been effective in lowering intraocular pressure. Some examples include cabbage, bell pepper, Brussels sprouts, citrus fruits, kale, papaya, strawberries, broccoli and guava. Naturopaths and Nutritionists will recommend taking anywhere from 2,000 to 35,000 milligrams a day.

If you have Glaucoma then this is one herb that you will want to avoid, sanguinarine. Sanguinarine is found in bloodroot and may help to progress glaucoma. You could be using this herb daily and not even know about it since it is mostly found in toothpastes and mouthwashes because the herb can help to fight gum disease. You should check the label of both your tooth paste and mouthwash before buying them and using them.

To help prevent Glaucoma from ever happening you can do a number of things. First you will need to make sure you are getting regular eye exams. It is recommended by The National Eye Institute that you get your eyes dilated at least once a year if you have been diagnosed with diabetes.