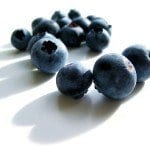 What Makes Blueberries so Friendly to Diabetics?: Fruits and vegetables have been the subject of recent scientific studies. As expected they are viewed as strong contributors to the wellness of individuals who have diabetes. The most recent study from the University of Michigan Cardiovascular Center took aim at blueberries.

ScienceDaily reports that this study provides, “Tantalizing clues to the potential of blueberries in reducing risk factors for cardiovascular disease and metabolic syndrome. The effect is thought to be due to the high level of phytochemicals – naturally occurring antioxidants – that blueberries contain.”

Realizing the rats may not be especially interested in eating actual blueberries researchers used freeze-dried blueberries that had been crushed into powder. The scientists then used this powder to mix with other food prepared for the rat. The total amount of blueberry mixture was 2% of the total diet.

By affecting the heart and metabolism the blueberries actually seem to be providing better conditions for the prevention or care of diabetes. Metabolic syndrome is a term used to describe a collection of problems including, “Too much fat around the waist, elevated blood pressure, elevated blood sugar, high triglycerides, and together these conditions increase the risk of heart attacks, strokes and diabetes,” according to ScienceDaily.

WebMD indicates, “The results suggest that antioxidant-rich blueberries may change how the body stores and processes glucose or sugar for energy, thereby reducing the risk of both heart disease and diabetes.” ScienceDaily reports that following the 90-day study the rats “Had less abdominal fat, lower triglycerides, lower cholesterol, and improved fasting glucose and insulin sensitivity.”

Some of the additional benefits included a lower overall body weight, fat mass, and reduced liver mass. An enlarged liver is synonymous with obesity and a resistance to the effects of insulin.

Steven Bolling, M.D., a University of Michigan heart surgeon and head of the Cardioprotection Laboratory was quoted as saying, “The benefits of eating fruits and vegetables has been well-researched, but our findings in regard to blueberries shows the naturally occurring chemicals they contain, such as anthocyanins, show promise in mitigating these health conditions.”

As with most studies of its kind these initial findings will be subject to ongoing scrutiny and will likely result in additional testing for the foreseeable future.

Blueberries have been mentioned as a ‘super fruit’ and contain multiple antioxidants as well as a significant amount of nutrients. In the United States blueberries are in season from May through June with a peak in activity in July.

WebMD reported that, “A related study… showed that men with risk factors for heart disease who drank wild blueberry juice for three weeks seemed to experience slight improvements in glucose and insulin control.” This has prompted an interest in further research related to the antioxidants and other natural properties found in blueberries.”