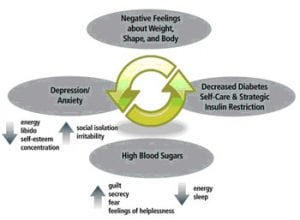 Diabulimia is an eating disorder that can occur in people that have Type 1 Diabetes. When the person does not give themselves their daily insulin, their body will go into a starvation mode, which over time will cause fat and muscle to breakdown. This will cause weight loss and can put the person in risk for a life-threatening condition known as Diabetic Ketoacidosis (DKA). If the condition goes untreated there is a high mortality rate.

Once a person is diagnosed with Type 1 Diabetes, they are put on a restricted diet, and on a daily routine of taking insulin shots. Weight gain is a possible outcome, which some people, especially teens will feel ashamed and embarrassed about. They decide skipping an insulin injection will help them get back to their pre-Diabetes weight. Diabulimia is not the same as other eating disorders such as Anorexia because the person does not have to vomit or starve to loose weight.

Purging of sugar from the body through the kidneys is the same as someone who purges or vomits when suffering from Bulimia. Women with Type 1 Diabetes are twice as likely to develop an eating disorder. A reason that may be surprising is that since there is a lot of focus on what the person is eating such as the amount of carbohydrates and following a diet, they might start feeling negative about food.

Diabulimia is most commonly found in teenage girls and young women. Unfortunately this trend may be gaining popularity because it is being talked about over the internet by people with Diabetes and eating disorders. Out of 450,000 women studied that have Type 1 Diabetes, one-third has skipped insulin injections specifically to loose weight. By doing so, they are risking going into coma, or even death.

The damage done to the person’s body can be enormous. People who skip their insulin have higher blood sugar levels than normal. This can cause the person to become dehydrated, and fatigued along with the muscle loss. Long term affects can cause the persons Diabetes to rapidly attribute to Diabetic complications such as eye disease, kidney disease, and even limb amputations because of vascular disease. Other symptoms that can be expected due to long term Diabulimia include high cholesterol, extreme fatigue, and severe neuropathy which cause nerve damage to feet and hands.

Teenagers have a lot of pressure to fit a certain image. Just one flip through a magazine or watching a television show can make your child feel self-conscious. If you are a parent to a teenager who has Type 1 Diabetes there are warning signs to be aware of. Intentionally skipping or lowering insulin doses could be because they do not want to gain more weight. Excessive exercise and an obsessive concern about weight and body image are other symptoms of Diabulimia.

Eating disorders are serious medical conditions. Mixed with Diabetes it can cause long-term complications and even death. If you feel someone you love may be dealing with Diabulimia it is best to discuss your concerns with your Doctor.