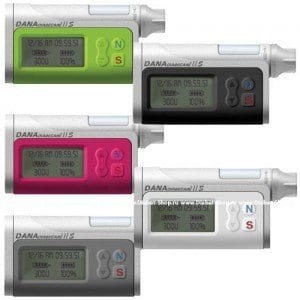 Made and assembled in Korea, the Sooil Dana Diabecare II Insulin Pump has been approved by the FDA. Distribution of the Diabecare insulin pump in the U.S. began in the year 2001. The makers of the Diabecare pump have created the world’s lightest insulin pump; the pump weighs only 1.8 ounces.

Although quite light, and smaller than a Paradigm pump, the Diabecare pump still has a reservoir that holds up to 300 units of insulin. Moreover, the small size of the pump did not require the pump makers to produce a tiny display screen. The Diabecare pump has a generous amount of space on its screen, although some users have indicated that they would prefer a screen with a better resolution.

By touching the proper icon, the pump wearer can call for display of a program menu on the screen. The screen also displays other important information, such as how much insulin remains in the reservoir. An alarm sounds if the insulin level falls below 20 units. The pump, the alarm and the screen are powered by a single 3.6 volt battery, which lasts two to three months.

The Diabecare pump delivers insulin into the implant every four minutes. The pump wearer can program the basal rate by altering the number of units dispensed during each insulin delivery. The controls have increments of 0.1 units.

The special features on the Diabecare allow the pump wearer to control various other parameters as well. The Diabecare pump has four different bolus programs: normal, default, pre-set and step programming. The pre-set program permits the quick coverage of standard meals.

The Diabecare pump can be set to send out a 30 minute melody reminder after a bolus insulin dose has been delivered. The pump also has a Guided Management pump lockout feature. Using that feature, the pump can be set for use by a child with diabetes.

While the holder of a Diabecare pump can not elect to use a different infusion set, he or she does have many choices during the purchase of the Diabecare pump. The pump can be programmed in one of six different languages: English, Spanish, Chinese, Korean, Hebrew and Turkish. The pump also comes in four different colors.