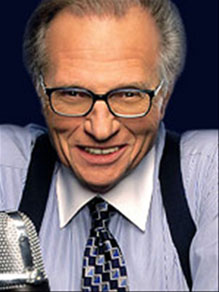 Lawrence Harvey Zeiger’s home town was Brooklyn, New York. He was born in 1933 and has had a fantastically active career. King’s first job in at a radio station was a bit of a snore. He was hired to perform small tasks as well as cleaning. This paid off as one of the regular hosts quit and King was put on the air in 1957 in Miami. With the death of his father at a young age, he never went to college. Even though, King had a run in with the law landing him in jail, he straightened his life out. Eventually, in 1985 he obtained his own TV talk show and has been on the air ever since.

Shortly after King began his TV program, he suffered a massive heart attack. This led to other medical problems as well. He had to undergo a quintuple bypass heart surgery. Before this life changing event, he was a heavy smoker. King would light up while interviewing his guests. Since his heart attack, he is a spokesman to halt smoking to prevent cardiovascular disease. King’s life-altering event was when he learned that he had diabetes. Since then, King has invited other celebrities to talk about diabetes on his daily show, an important part of CNN’s prime time line-up.