New research suggests that drinking less than a couple of glasses of water every day increases an individual’s risk of having elevated blood sugar levels in an unhealthy range. 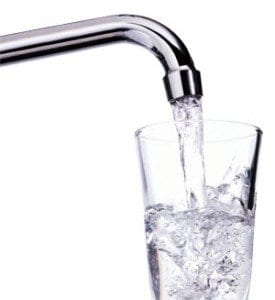 New research suggests that drinking less than a couple of glasses of water every day increases an individual’s risk of having elevated blood sugar levels in an unhealthy range.

The study found that adults who drank half a liter of water per day (about two glasses) were more likely to demonstrate blood sugar levels in the pre-diabetes range than those who drank more water. Pre-diabetes is a condition in which blood sugar levels are elevated but not high enough to be characterized as being related to diabetes.

The study does not prove, however, that drinking water directly lowers the risk of developing diabetes. According to Lise Bankir of the French research organization INSERM, the findings demonstrated a correlation between water intake and blood glucose levels but did not show a cause and effect relationship between the two. Bankir did comment that a causal relationship is possible.

“There are good arguments to suggest that there could be a real cause-and-effect relationship in the association we have found,” she said. “But this is not a proof.”

According to Bankir, vasopressin receptors can be found in the liver, which produces sugar. The study demonstrated that vasopressin injections in healthy individuals caused blood sugar levels to spike temporarily.

Researchers studied 3,615 French adults, age 30 to 65, who had normal blood sugar levels at baseline—the beginning of the study. Around 19 percent of the study participants stated that they drank less than half a liter a day; the rest of the participants drank a liter or more.

Researchers followed up with the participants for nine years, finding that 565 of the participants developed elevated blood glucose levels while 202 developed Type 2 diabetes. The research team found that the individuals who drank at least a half a liter of water per day were 28 percent less likely to develop elevated blood glucose levels than those who drank less than a half a liter of water every day.

Still, the findings did not demonstrate a definite statistical link between consumption of water and the risk of developing diabetes. Bankir stated that the sample size was “too small to get a significant results” and a larger cohort would be required before a causal relationship could be proven.

Individuals who drink less water are more likely to drink high-sugar drinks such as soda and juice in replacement. Such beverages are often the culprit for high blood glucose levels. However, Bankir’s team adjusted for several factors that could influence results, including the consumption of sugary drinks, exercise levels, and body weight. Even after the adjustments, individuals who drank less water still had higher blood sugar.

One explanation is that individuals who drink more water are more likely to engage in other healthy habits. “Healthier behaviors correlating with higher water drinking could account for the observed association,” said the research team.

Even though the study was unable to prove a direct relationship between drinking more water and lowering one’s blood sugar, Bankir suggested that increasing water intake is always a good idea. “In Western countries, the consumption of sugar is surely too high and contributes to obesity,” she said. “Drinking less of them and more pure water can only be good in my view.”