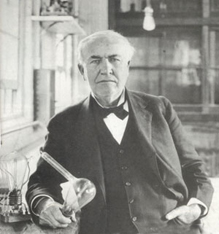 Thomas Edison was one of the most famous inventors in American history. He was born in 1847, a native of Milan, Ohio. Edison was credited with 1300 patented inventions, including the phonograph, the incandescent light bulb and the motion picture camera. Edison was only in school for 3 months. His mother took him out and home schooled him the remainder of his years. Edison believed that mass-production was the best method to make profit for his inventions. By 1887, 121 Edison power stations delivered electricity to homes and businesses. He launched propaganda to the people that AC was dangerous to use and the DC that he produced was the more practical way to go. Thomas Edison died in 1931. He was 84 years old.

Edison was diagnosed with diabetes in his lifetime. He made an effort to control and maintain his disease with a healthy lifestyle. Edison did not drink and he did not eat meat.