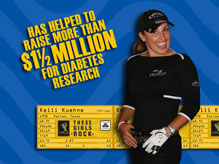 Kelli Kuehne is a famous golfer diagnosed with diabetes. She was born in 1977 from Dallas, Texas. The Kuehne family is full of famous golfers as well. Her two bothers activity plays the sport and wins tournaments. Kuehne has been a part of several championship matches including United States Girl’s Junior Amateur, United States Women’s Amateur and the British Ladies Amateur. She has won all three titles. Kuehne began the professional tour and finally won the LPGA Corning Classics in 1999.

A majority of athletes with diabetes have made public statements about their condition. Kuehne is one of those people. She has been dealing with diabetes since the early age of 10. On May 18, 2003, Kuehne said this: “My biggest goal in life is to help diabetic children understand that because they have the disease they need to take care of themselves, see a dietitian and get plenty of knowledge about the illness.”