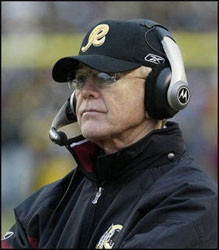 Joe Gibbs, the famous coach and mentor, guided his Washington Redskins to the Super Bowl in 1982, 1987 as well as 1991. This impressive record did not stop there. Gibbs also has 4 NFC championship titles under his belt as well. An exhausted Gibbs retired in 1992. He began to concentrate on his NASCAR racing team. This was the Joe Gibbs Racing that won an astonishing 3 championships. In 2004, Gibbs came out of retirement and again joined his Washington Redskin team. For a second time as the head coach as well as the president of the team. Again in 2008, he retired for good this time; however, Gibbs will still work towards the teams efforts as an adviser.

Gibbs began his life in 1940, from Mocksville, North Carolina. He has had an impressive career life. Nevertheless, after his first retirement in 1992, he found out that he was diabetic. This did not stop Gibbs from accomplishing his career goals. He promised his wife that he would take it easy as well as eat healthy and stay and a regular sleeping schedule. He has had an episode where his glucose levels were in danger. Gibbs made a hospital visit and the medical team gave him the required amount of insulin. He was able to leave the hospital that evening.