When all patients with insulin-dependent diabetes use a syringe for the administration of insulin, those patients need to learn to watch for evidence of pooling. When insulin does not enter the blood stream fast enough, it then forms a “pool” in the area in which it has been injected. A patient can help to cut-down on the chances for such pooling. 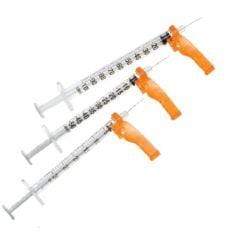 Pooling: When all patients with insulin-dependent diabetes use a syringe for the administration of insulin, those patients need to learn to watch for evidence of pooling. When insulin does not enter the blood stream fast enough, it then forms a “pool” in the area in which it has been injected. In a short period of time, the pool of insulin is released all at once and a person’s blood sugar lowers rapidly. This primarily happens when diabetics use the stomach as an injection location.

Muscle activity helps to move insulin into the bloodstream. Muscle activity speeds the redistribution of blood. The blood swiftly carries the insulin away from the area of the injection. The amount of blood flowing to the site of an injection plays a role in modulating the rate of absorption for any drug injected at that same site.

A diabetes patient can learn to watch for signs of pooling. Pooling can cause dizziness, faintness or lightheadedness. Evidence of those symptoms should signal the patient to reach for a ready source of sugar, something that will cause the effect of the pooled insulin to subside. Sugar is a treatment for the symptoms caused by the insulin pooling

Patients have become familiar with the concentration of the injected insulin. In the United States, that concentration is U-100 (meaning 100 units per cubic centimeter). Diabetes patients have learned that syringes have been designed to hold 100, 50 or 30 units of insulin. That knowledge helps to insure administration of the proper insulin dosage.

While the design of the syringes can help with administration of the proper insulin dose, it can not prevent the possible pooling of the injected insulin. Factors that enhance the absorption of insulin can aid the avoidance of pooling. Elements in the method of insulin administration can also lower the chances for pooling. This article will look at those factors and those elements.

The site of an insulin injection helps to determine the rate at which the insulin will be absorbed. Injection of insulin into the abdomen guarantees rapid absorption of the injected drug. Injection into the arm, the buttock or thigh should be made with the anticipation of a slower rate for insulin absorption.

The many types of insulin that are now available to diabetes patients no longer need to be given to those patients by a simple injection. Newer devices have been designed to help diabetes patients get their insulin in a less painful manner. Some of the devices now on the market also help to prevent the problems caused by insulin pooling.

Jet injectors send insulin through the skin, in the form of a fine spray. The fine mist disperses quickly in the body, sending insulin into the blood faster. A diabetes patient should not expect problems with pooling if he or she is using a jet injector. Still, the makers of the jet injectors have not ironed out all of the problems that are associated with the use of such injectors. A diabetic using a jet injector could benefit from an improved ability to control the intensity of the spray.

Inhaled insulin appears to have the potential to replace the need for rapid acting insulin. However, the Exubera medication is no longer available.

Doctors and diabetes patients would welcome the development of a skin patch. The use of such a patch would help to eliminate problems with pooling.. The size of the insulin molecule poses the greatest challenge to creation of a workable insulin patch.