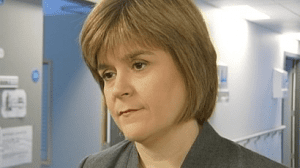 Islet Cell Transplant is Cure for Type 1 Diabetes for Lady in Scotland: Kathleen Duncan, a resident of Scotland, no longer has to take injections of insulin because her type 1 diabetes has been cured due to an islet cell infusion that was performed in her homeland of Scotland by the Scottish National Pancreatic Islet Transplant Programme.

Kathleen had type 1 diabetes for over 30 years and used insulin to treat her diabetes. But Kathleen Duncan also had a condition referred to as “hypoglycemic unawareness.” Hypoglycemic unawareness is when a person cannot sense that they are having an insulin reaction (severe low blood sugar). The majority of type 1 diabetic patients have some indication that an insulin reaction is coming on through symptoms that their body exhibits, such as, but not limited to, shakiness, confusion, severe headache, poor coordination, hunger, irritability, dizziness and rapid heartbeat. If the low blood sugar level is not treated within a reasonable amount of time, these initial symptoms can become more severe and include, but are not limited to, seizures, unconsciousness, stroke-like symptoms, coma and even death. When a person’s body does not “talk” to them and tell them they are in the beginning of an insulin reaction, and their body doesn’t sense that the insulin reaction is getting severe, the result can be disastrous.

Because of Kathleen’s hypoglycemic unawareness, she was one of two patients to receive the islet cell transplant, and since that time has no longer had to rely on insulin.

Kathleen, married to Chris and with a son named David, led a very precarious life before this transplant. She never knew when her son might come home from school and find her unconscious or if she would lose consciousness in a public setting and have to be transferred to a hospital for treatment.

In the program that is being undertaken in Scotland, the candidates for “islet cell transplantations are between the ages of 18 and 65, have had type 1 diabetes for more than five years, and are experiencing diabetes-related complications.”

Nicola Sturgeon, Scottish Cabinet Secretary for Health, stated in a statement to the media: “In Scotland, around 28,000 people currently have type 1 diabetes, with an estimated 2,000 experiencing hypoglycemic unawareness which can have life threatening implications. This service, funded to assess around 20 patients a year, of whom 10 to 12 would be suitable for islet transplantation, has shown how it has the potential to transform the lives of people with this condition. The ideal is to make them no longer dependent on insulin injections.”

Sturgeon further added that it is the shortage of donor organs that is the main challenge. The UK had a UK Transplant Week that encouraged people to sign up for the NHS organ donor register so more organs are available for transplantation, which could save many lives and improve the lives of people in need.

Dr. Iain Frame, Director of Research at Diabetes UK, was quoted as stating: “Diabetes UK played a big part in proving islet transplantation was feasible and ensured it was made available on the NHS. We are delighted to see transplants have now been introduced in Scotland. Although the numbers of people with type 1 diabetes who will benefit from this program are quite small, with further research we will overcome the difficulties of finding cells to transplant and help the cells survive longer in the body. This will therefore make this a treatment available to more people.”

The largest difficulty in the transplantation of insulin-producing islets is the process by which these islets cells are transplanted. It is a costly endeavor due to isolating the islets, and this process is very complex. The process is also very labor intensive and takes a lot of time and has to be performed in a completely sterile environment.