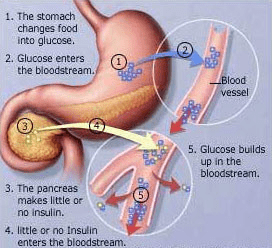 Hopes for an Artificial Pancreas Down The Road: Findings of some of the newest data working towards the creation of an artificial pancreas will be presented at the Juvenile Diabetes Association meeting in San Diego, California, in June 2011.

“The Mayo Clinic is likely to begin clinical trials of the artificial pancreas in November of this year with a handful of inpatient volunteers.” This study would involve a strict diet, exercise and insulin. This information gathered will then be fed into an “insulin-delivery algorithm which mimics the body’s natural process of monitoring and responding to glucose levels in the bloodstream.”

At this time, Mayo Clinic endocrinologists Yogish Kudva, MBBS, and Ananda Basu, MBBS, MD, are helping in the work of developing the artificial pancreas that will automatically deliver insulin with a precision that is not available at this time.

One aspect of their study has been to study the everyday effects of everyday diabetes. Movement, sitting, standing, eating. How you move, what you do before and after you eat, etc. This type study has not been undertaken in the past and sounds like it has the potential for providing necessary information to help in creating a precise artificial pancreas.

The more you move, the better the insulin works and lowers the blood sugar levels.

Kudva and Basu have been doing research for nearly 15 years on various aspects of diabetes and obesity. Their work has contributed to the creation of the artificial pancreas. Their new information will be presented at this planned meeting of the Juvenile Diabetes Association in San Diego.

Approximately 3 millions Americans live with Type 1 diabetes, formerly referred to as juvenile diabetes mellitus. Of the two different types of diabetes, Type 1 is the most difficult to control. When Type 1 diabetes is the diagnosis for an individual, that means that the pancreas in that person’s body no longer produces insulin and in order to live, that person must take artificial insulin for the remainder of his/her life. This artificial insulin is injected into the body in the form of either an insulin pump or through a syringe filled with insulin. In Type 2 diabetes that cannot be controlled with oral medication, diet modifications and an exercise program, insulin injections are used at times. Type 1 diabetes cannot be controlled through oral medication, diet modifications or an exercise program. Type 1 diabetes can only be controlled through insulin, with the help of diet control and exercising to keep blood sugar levels under better control.