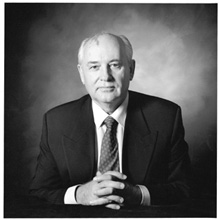 Mikhail Gorbachev is one of the most famous Russian leaders of all times. He was born in 1931, a native of Privol’noe, Stavropol region, Russia. Gorbachev worked closely with President Ronald Reagan to bring the cold war to an end. He was the leader of Soviet Union from 1985 until its end in 1991. In 1990, he called for the withdrawal of all Soviet troops from Europe in 1990. Gorbachev was awarded the Noble Peace Prize for his work in bring the Cold war to an end. At present, Gorbachev is the leader of the Union of Social-Democrats. Mikhail Gorbachev is 77 years old.

During his life he has had some fantastic achievements. Gorbachev has another success story as well. He was diagnosed with type 2 diabetes, but it has not slowed him down. He manages his diabetes with the correct diet and exercise regiment in addition to medication.