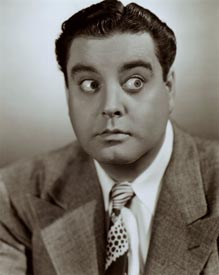 Jackie Gleason was born as Herbert John Gleason in 1916. He was a native of Brooklyn, New York. Gleason is one of the most popular comedians in American history. Not only did he perform the comedic route, he was also known for dramatic roles as well. Most people know Gleason for his role as Ralph Kramden on the hit TV show “The Honeymooners”. His earlier life was troublesome, his father left and his mother died when he was only 19 years old. Gleason began his career on Broadway. “The Jackie Gleason Show” was an hour long variety program in the 50s. This became the second highest rated television show in the United States. Gleason was also a musician playing jazz. He has received an Academy Award for his dramatic performances. Jackie Gleason, an American icon, died in 1987 from liver and colon cancer. He was 71 years old.

Gleason was another comedian with diabetes. Gleason developed type 2 diabetes. While he did not make a direct reference to his diabetes while on-stage, he did become associated with an interesting statement. During almost every appearance, Gleason would say, “How sweet it is.”