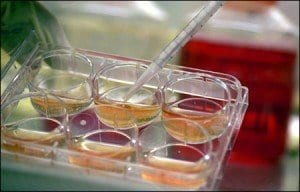 Diabetes is a common disease all over the world. Both type 1 and type 2 diabetes happen when the beta cells located in the pancreas fail to produce insulin. Insulin in a hormone that keeps sugar related within the body.

Since this has been known for years of medical research, researchers believe that one method to treating diabetes is to encourage redevelopment of new beta cells.

In today’s medical studies, there are two ways of generating endocrine cells such as beta cells that secrete hormones from human embryonic stem cells or hESCs, either by producing the cells in vitro in culture or transplanting undeveloped endocrine cell originators into mice.

Researchers at the University of California, San Diego School of Medicine are working with scientists from a San Diego-based biotech company ViaCyte, Inc.; they were comparing and contrasting the two types of hESC-derived endocrine cell populations and primary human endocrine cells. The hope in mind is to produce a new stem of cell therapies for diabetes.

Gene expression and chromatin architecture were compared by scientists and here is what they found says principal investigator Maike Sander, MD, professor of pediatrics and cellular and molecular medicine, and director of UC San Diego’s Pediatric Diabetes Research Center. “We found that the endocrine cells retrieved from transplanted mice are remarkably similar to primary human endocrine cells. This shows that hESCs can differentiate into endocrine cells that are almost indistinguishable from their primary human counterparts.”

Researchers found that the endocrine cells that were produced in vitro did not have the same features of primary endocrine cells and they failed to express the majority of genes, which are very important for endocrine cell function.

Sander explained one theory of moving on with cell replacement therapies. He suggested that transplantation of the endocrine precursor cells into human so they can mature may be possible since this happens with mice. Sander said, “However, we don’t currently know whether the maturation process will occur in humans in the same way.”

Another process involves generating fully functional endocrine cells in a culture dish and transplanting these cells into humans. However, this type of dish does not exist yet.

“This information will help devise protocols to generate functional insulin-producing beta cells in vitro,” said Sander. “This will be important not only for cell therapies, but also for identifying disease mechanisms that underlie the pathogenesis of diabetes.”