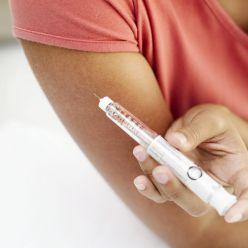 Early Signs Of Diabetes: The presence in the blood of large amounts of glucose puts a strain on all the cells in the body. The longer that any person remains unaware of that strain he or she hastens the destruction of those cells. That fact explains clearly the importance of learning and then watching for the early signs of diabetes.

Becsause there are two types of diabetes—Type 1 or insulin dependent diabetes and Type 2 or insulin non-dependent diabetes—this article will include details about two different sets of signals, signals that alert a person to the fact that he or she has diabetes. Since Type 1 diabetes occurs among children as well as adults, parents must watch for the appropriate signs, signs linked to the appearance of diabetes.

A child with Type 1 diabetes might suddenly exhibit a frequent need to use the bathroom (in order to urinate). He or she might complain about an abnormal thirst or an seemingly insatiable appetite. A child’s comments about an unexplained hunger might be made all-the-more alarming by evidence that the same child has lost a good deal of weight.

While any of those symptoms should alert a parent to the chance that a son or daughter has Type 1 diabetes, a few other behaviors could help to confirm the parents; fears. A child with undiagnosed, Type 1 diabetes displays an abnormal irritability, a decided weakness or fatigue and possible flu-like symptoms (nausea and vomiting). Those symptoms will not disappear unless and until the child’s diabetes is under control.

When a patient has Type 1 diabetes, only the administration of insulin gives the patient a tool for controlling his or her diabetes. Today, young people with Type 1 diabetes do not always need to receive insulin injections; they can be equipped with an insulin pump.

In the past, the early signs of Type 2 diabetes did not much concern young parents. In the past, only older adults were expected to develop Type 2 diabetes. Now, however, the prevalence of fats and simple carbohydrates in the diet, combined with too many forms of sit-down entertainment, has lowered the average age of the person with Type 2 diabetes.

Both older adults and young adults now arrive in a doctor’s office with complaints about frequent urination, excessive thirst and a strong craving for sweets and starches. These are seen by doctors as early signs of Type 2 diabetes. When a physician has a patient with such complaints, then he or she needs to search for the cause of those complaints. He or she must check for proof that the patient does indeed have Type 2 diabetes.

Doctors realize the some symptoms found among Type 2 diabetics are also found among the general population of aging individuals. Doctors will thus complete their examination with the scheduling of a glucose tolerance test. Such a test can confirm or refute a diagnosis that has been based on evidence of the early signs of diabetes.

In the future, doctors might have a way to obtain earlier evidence that a patient has or does not have Type 2 diabetes. Researchers are now looking for antibodies (special proteins) that appear in the blood or urine of a diabetic patient. Identification of such antibodies would allow for the development of a new diagnostic test, a test for diabetes.

In order to appreciate the benefits that would come from development of such a test, one needs to understand the span of time between the appearance of the early signs of diabetes and the evidence that a patient has an abnormally high blood glucose level. The earliest signs of diabetes might be observed by a physician or patient before a glucose tolerance test can produce proof that the patient does in fact have Type 2 diabetes.

If physicians must rely on data from the glucose tolerance test in order to let their patients know whether or not they have Type 2 diabetes, then those patients become subject to substantial cell damage before that test can give a positive result. If doctors could test at an earlier time for some proof that a patient did or did not have diabetes, then doctors could help patients avoid some of the cell damage caused by uncontrolled diabetes.

Today, a number of tests check for antibodies that are associated with cancer. The PSA test allows doctors to find evidence that an older male patient has prostate cancer. Armed with such a test, doctors are better able to treat the cancer early, and to avoid the unchecked growth of the cancer cells.

Researchers hope to unearth proof that a different antibody appears in the system of a patient with Type 2 diabetes. Researchers want to find an antibody that is produced by the body even before the patients and doctors can note the presence of early signs of diabetes If doctors could send blood or urine samples to the lab, and if the lab could test for the presence of one particular, tell-tale antibody, then diabetic patients could begin a diabetes management plan at a much earlier time.