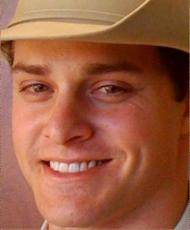 He is a 21st century cattle rustler, a baby-faced cowboy and owes a few years behind bars. Oh, did we mention he has brittle diabetes?

Roddy Dean Pippin is a mere 25 years of age and already a convicted criminal. He sports a bright smile and a cowboy hat. According to the American-Statesman, “Despite cries that to send him back behind bars might be a death sentence, Pippin was headed back to a state jail… to serve the remaining four years of his sentence. Pippin had been freed from state lockups and placed on house arrest about two years ago after questions were raised about whether he could receive proper medical care in prison because of the volatility of his diabetes.”

Pippen surrendered to officials in North Texas recently on horseback. Pippen was quoted last week as saying, “I wasn’t this nervous going in the first time. I’m scared. But now I know what I’m facing. I hope I survive this. I don’t know. I’m just praying. That’s all I know to do.”

Pippen was convicted when he was just 21 years old. He was eventually released on house arrest (wearing an ankle monitor) because of his diabetic condition.

There have been those who have lobbied to get Pippen released from jail so his health conditions can be monitored more easily, but District Attorney John Staley Heatly told the American-Statesman, “It was a plea-bargained sentence (Pippin) agreed to. If he in fact cannot receive proper care (in prison), the law allows him to apply for a medical release. … Instead, he’s trying to get his sentence changed. He owes four years.”

Texas has done an admirable job in seeking to assure critics that Pippen will be monitored in relation to his brittle diabetes.

In a 2005 article Pippen told reporters, “I deserve a lot worse. One hundred years ago, I would have gotten the rope.” Four years later Pippen uses social media to keep in touch with supporters, has a publicity firm managing publicity and he has a video out. District Attorney John Staley Heatly responded to that last bit of news by saying, “”The conditions of his probation required him to be confined to his mother’s home and the immediate vicinity — not out riding along the highways and through the woods. Too bad I didn’t see that two weeks ago. I could’ve filed to revoke him.”

Heatly was responding to the fact that the video was made in a location that was in direct violation of the conditions of his house arrest.

Still, there remains concern for the health of convicted felon Pippen. Robert McCausland, a Dallas-area tech official was quoted by the American-Statesman as saying, “The last time he was in prison, he had to become deathly ill to get help. There is a real possibility he could die. Roddy should not have to pay with his life.”

Pippen has had type 1 diabetes since the age of six and seizures have been common since that time. He agrees that not being able to hold a job due to his condition caused him to make some bad choices, and families who had cattle stolen from them agree. However, Pippen has become something of a darling among a growing fan base because as the American-Stateman said, “He is polite and engaging, speaks often about his religious faith, about riding the plains on his horse Baby Face, about his love of the Texas cowboy legends.”

This perhaps only adds to the debate surrounding diabetes care among prison inmates where the issues are real and easy answers are hard to come by.