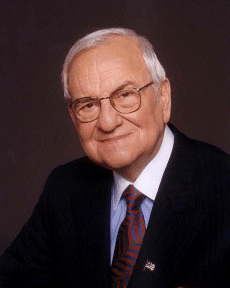 Lee Iacocca has donated over $30 million to diabetes research seeking a cure for the disease, which can lead to debilitating and fatal complications. In 1983, Mary McCleary Iacocca, Lee Iacocca’s wife, died from complications of Type 1 diabetes. In 1984, Iacocca created the Iacocca Family Foundation, a foundation dedicated to funding promising research projects in the search for a cure for diabetes.

Lee Iacocca is known as a world-famous American businessman, especially for his rise in the ranks at Ford Motor and then the man who rescued the Chrysler Corporation in the 1980s. At that time, his face was all seen around the world on TV and in the newspapers about that huge endeavor. And he succeeded. He pulled Chrysler out of the pits of doom and turned the company around.

The Iacocca Family Foundation has been one of the main patrons of the research of Denise Faustman at Massachusetts General Hospital. In 2000, Iacocca founded Olivio Premium Products, which manufactures the Olivio line of food products made from olive oil. He donates all profits from the company to diabetes research. Many profits from the sale of his numerous books have also gone to finding a “cure.”

From June 24 to June 28, 2011, The American Diabetes Foundation held its 71st Session in San Diego, California, at the San Diego Convention Center. At that conference, Faustman, Director of the Massachusetts General Hospital Immunobiology Laboratory, presented abstracts from a clinical trial that was funded by the Iacocca Family Foundation.

Faustman presented information regarding the vaccine Bacillus Calmette-Guerin (BCG). This was a Phase 1 human (and mice) trial, which indicated that BCG vaccine, which was developed to prevent tuberculosis and is currently used to treat bladder cancer, might possibly kill the T-cells that cause the pancreas to stop producing insulin. This BCG vaccine is approximately 80 years old and apparently temporarily reversed Type 1 diabetes in the human trial.

Phase 2 of the clinical trial by Faustman will soon be underway at the Massachusetts General Hospital Immunobiology Laboratory.

Type 1 diabetes usually strikes the young, and can only be treated with the injection of insulin, as the pancreas no longer produces insulin. The body must have insulin in order to live. Without insulin, the person dies.

Type 1 diabetes causes peaks and lows in the blood sugar levels of those with diabetes. It is very difficult to keep these levels under control, even with the use of insulin and even with the insulin pumps that are now in use. With these peaks and lows in the blood sugar levels, damage is slowly done to the body. Over time, this damage leads to severe complications, such as kidney failure, blindness, numbing (neuropathy) of the limbs which can eventually lead to amputation, and other serious effects, such as strokes and heart attacks, that can cause the person to die from the complications.

There is no cure for Type 1 diabetes. There is ongoing work all around the world to find a cure, and we all wait for this cure. We hope for a cure in time to help our own children. The Iacocca Family Foundation is one of the major foundations in place to help find this cure. A great undertaking by a great man.